Today i looked over some of the signs i had taken pictures of at Heathrow airport and evaluated them. Did i think they worked well? why/why not? and how could they be improved? here are some examples(to view larger please click the image):

The below image is of the standard signage that they have at Heathrow and many British Airport Association (BAA) airports. There are a few things that I don’t agree with:

This sign holds similar issues to the above, although has one more that I would like to add: 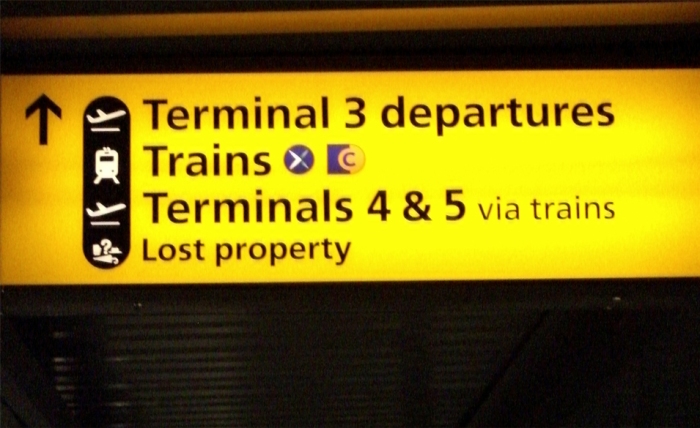 On the subject of little sense, this scene sums it up perfectly:

When you are standing here, the pillars surround the “smoking area”, on each side of the pillar it says “no smoking” I just don’t understand what area isn’t allowed to be smoked in, unless you just cannot smoke next to a pillar?

This sign I thought was an improvement on the rest, the one issue I have with it is the fact that the areas you can access via the lifts are much smaller than I feel they should be. The sign could be extended and allow for larger information to appear.

Last of all, this sign. I don’t have much to say about this except that most other signs are using the Sans serif typeface, with the occasional serif exception such as this. I don’t understand why this is the case, it just seems like more effort in the design process to pick another font that is not needed.